On January 23, 2005, about a month after losing your Auntie Sally, we picked you up from John Wayne Airport. You were not even eight weeks old and we were worried how you would handle a five plus hour flight from Texas in a small pet carrier in cargo. We parked the car and made our way to the baggage claim area and waited as they retrieved you from the back. We looked inside expecting to see a nervous little ball of fur in the back of the crate. What we actually saw was a brave little Stumpy Tail Cattle Dog who appeared to be completely unaffected by the fact that you were just plucked from your current situation in Texas, dropped off at an airport in College Station, spent five plus hours in the belly of a plane, and was now staring at two strange faces peering in at you.

It turns out, this would be your mantra in life; you took everything in stride and approached life with an open heart.

Your official name was Silver Park Desert Lilly but we decided that just plain Lilly would be easier for obvious reasons. 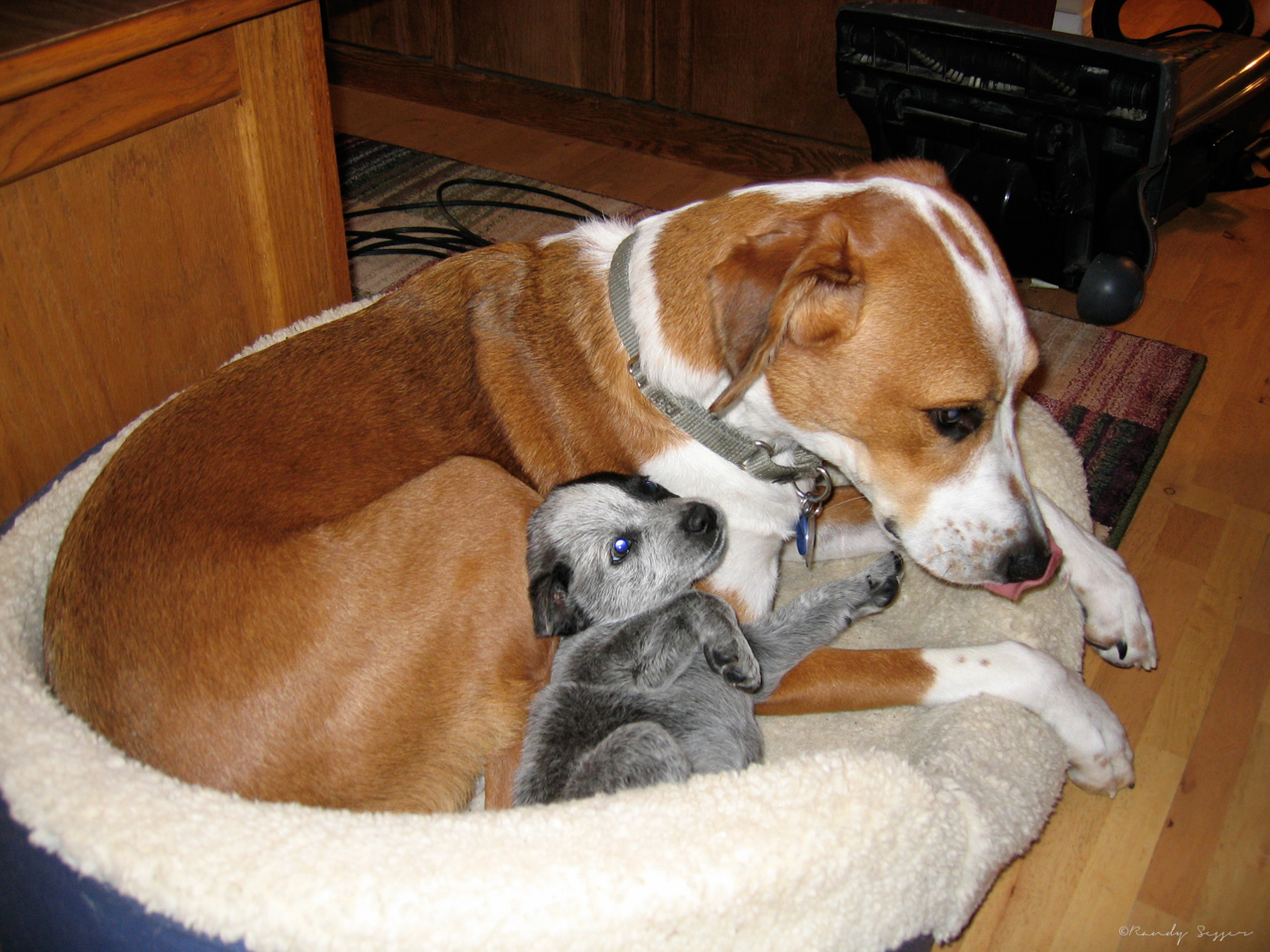 Lilly and Roxy
We brought you home and took you over to a neighbor's apartment that also had a couple dogs. You were immediately smitten with Roxy. The next day you met Rocco and Bernie and you were equally excited and taken with those boys. The first interactions would prove to be an unbreakable bond between you and your friends. Nothing could tarnish your friendship with Roxy, Santo, Rocco and Bernie. Even when you were accidentally bitten on the tongue[1] while giving kisses to Roxy while she was chewing on a toy. Thinking back, this would be one of your most enduring qualities; you loved your friends and protected them at all costs. 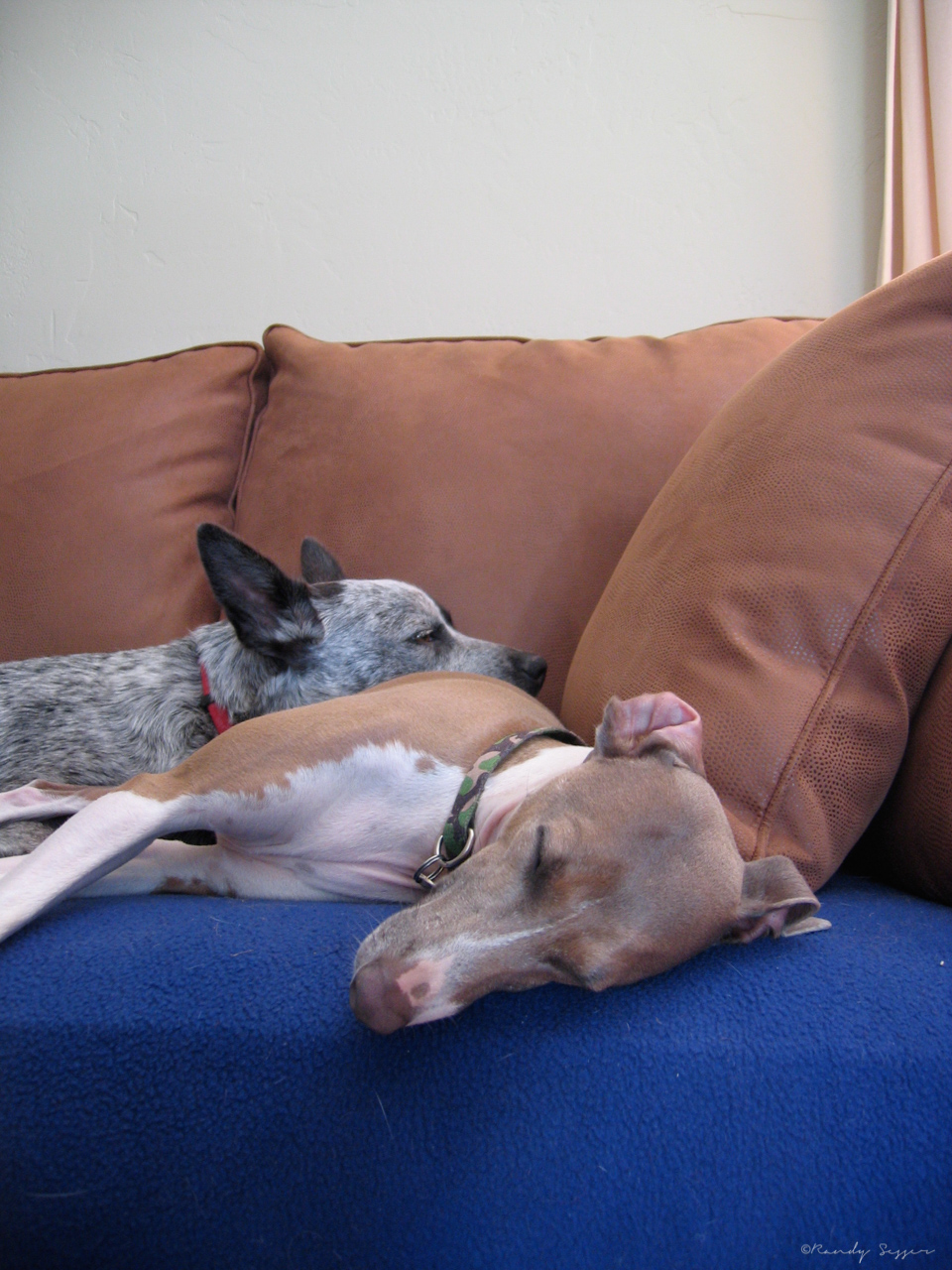 Lilly and Rocco
A week later, we drove to Phoenix to pick up your sister, Luna. In hindsight, we probably should have waited a while before getting you a sibling because, at that age, you were both little devils and we "hoomans" were there purely for food, shelter and entertainment. Cute little devils, but devils nonetheless. I remember we left in the afternoon from Southern California to drive to Arizona and as it got late, we stayed in a hotel out in the desert. Unbeknownst to us, you came to us with hookworm as well as giardia, so you had diarrhea. But, you took it in stride and didn't really miss a beat. You proudly bounced down the hallway of the hotel at 2 o'clock in the morning like it was no big thing.

In their younger years, this happened a lot.
We showed up in Phoenix and met with Luna's foster mom and a another littermate we would help transport to another adopting family. You became the immediate boss of the pack even though you were quite a bit smaller than the rest. You were fearless. Then Luna's foster mom put some kibble on the ground and you began to Hoover up the food, growling and generally being a pushy jerk. This was the first sign that you really liked food (and that we needed to convince you that you would never starve to death[1:1]).

The first couple months were extremely challenging with you two. You would play for an hour and crash for two or three. You challenged the cats to duals you most likely would lose (and whom were immune to your cuteness and totally not threatened by your aggressive behavior). You were good about not peeing in the house... until I mentioned the fact, while filming you, and you proceeded to pee on the spot. You were a bully to your new sister for no apparent reason. You both decided anything on wheels was unholy and should be eradicated from this earth at all costs. And, you were slightly food aggressive. We had our work cut out for us and even consulted with a trainer. We started to feel hopeless. We even reached out to your old family in Texas and inquired about sending you back. We are not terribly proud of that moment.

But then, in February, while I was out of town, you came around and stopped being a little shit head. You started to show a little more love for the people who cared for you. It wasn't much, but it was enough to save you from going "back to the farm." 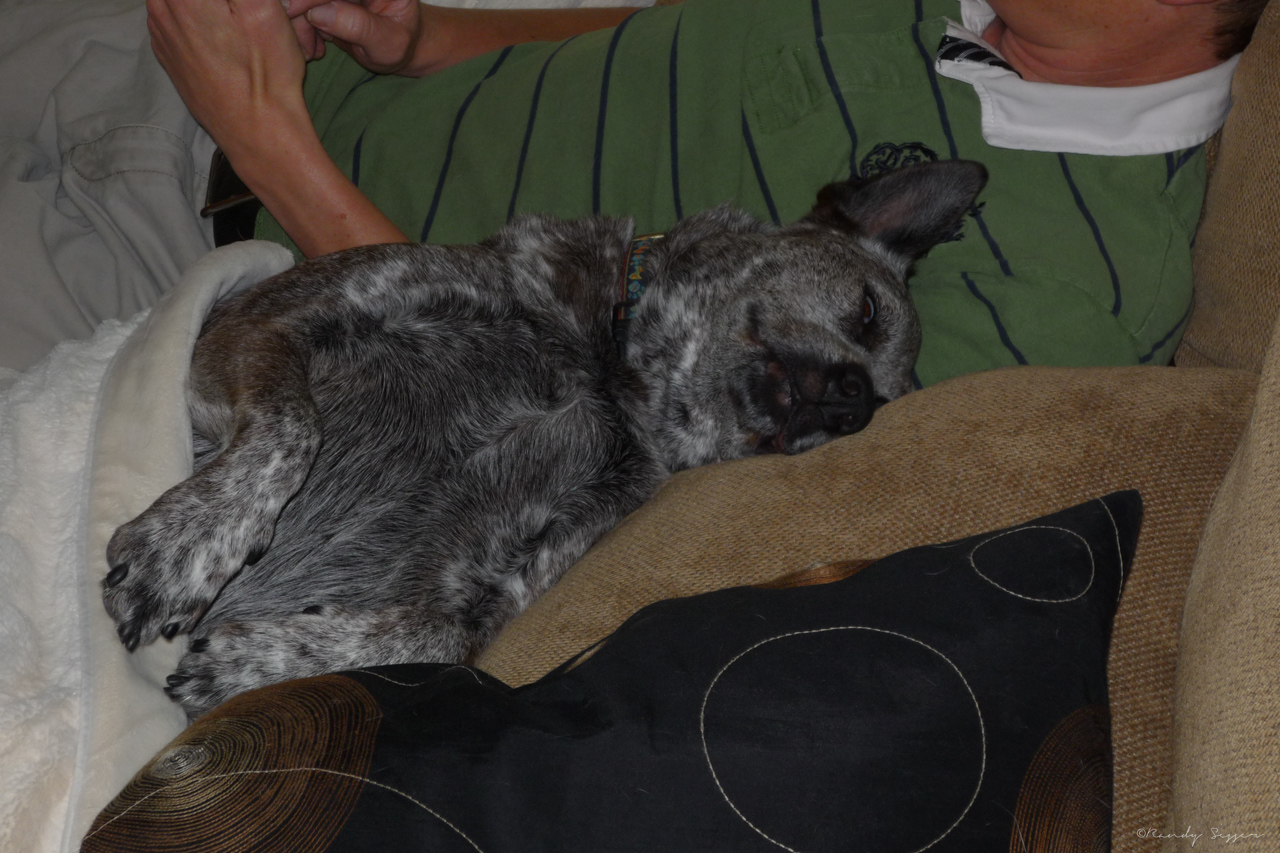 She had a habit of laying right up against me. I remember nights when I had about 14" of mattress in our king size bed.
The beginning was rough, but we ultimately found a balance between what we all wanted. There were hiccups along the way[1:2] but, little by little, you showed us the love we needed and friendship we desired. To quote a good friend, "[you] gave us so much and asked for so little." 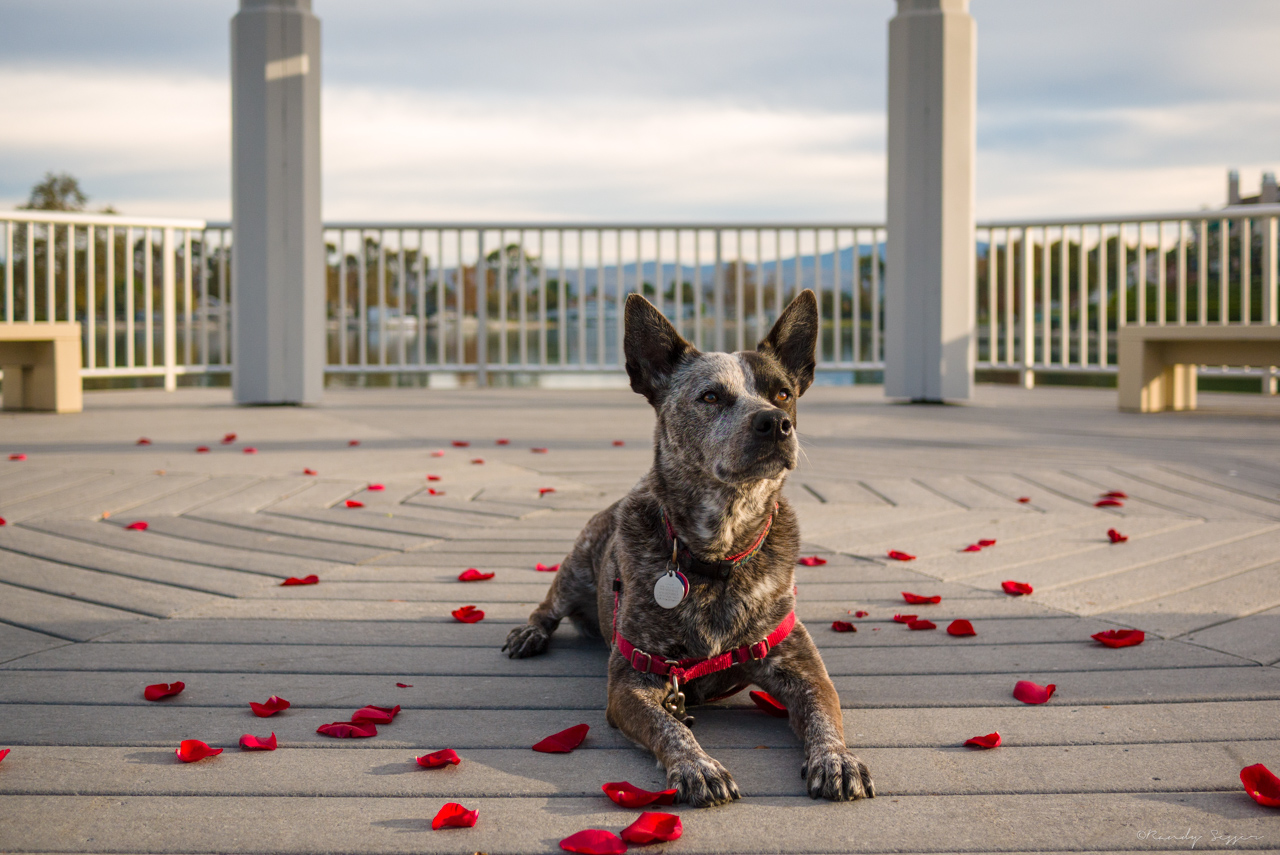 Lilly on her birthday; November 28th, 2013
Over the years, we spent countless hours at the dog park, enjoyed a few beach days, traveled to every state on the west coast, stayed in hotels, camped, hiked, ate out... we took you everywhere and anywhere we could. You survived four moves, including a 1000 mile move north without missing a beat. New places meant new friends in your head, I'm sure of that. Through our adventures, you forced us to get out, explore and meet new friends (both four and two legged). You were well traveled and we were proud of how far you came from the cute little demon you were. 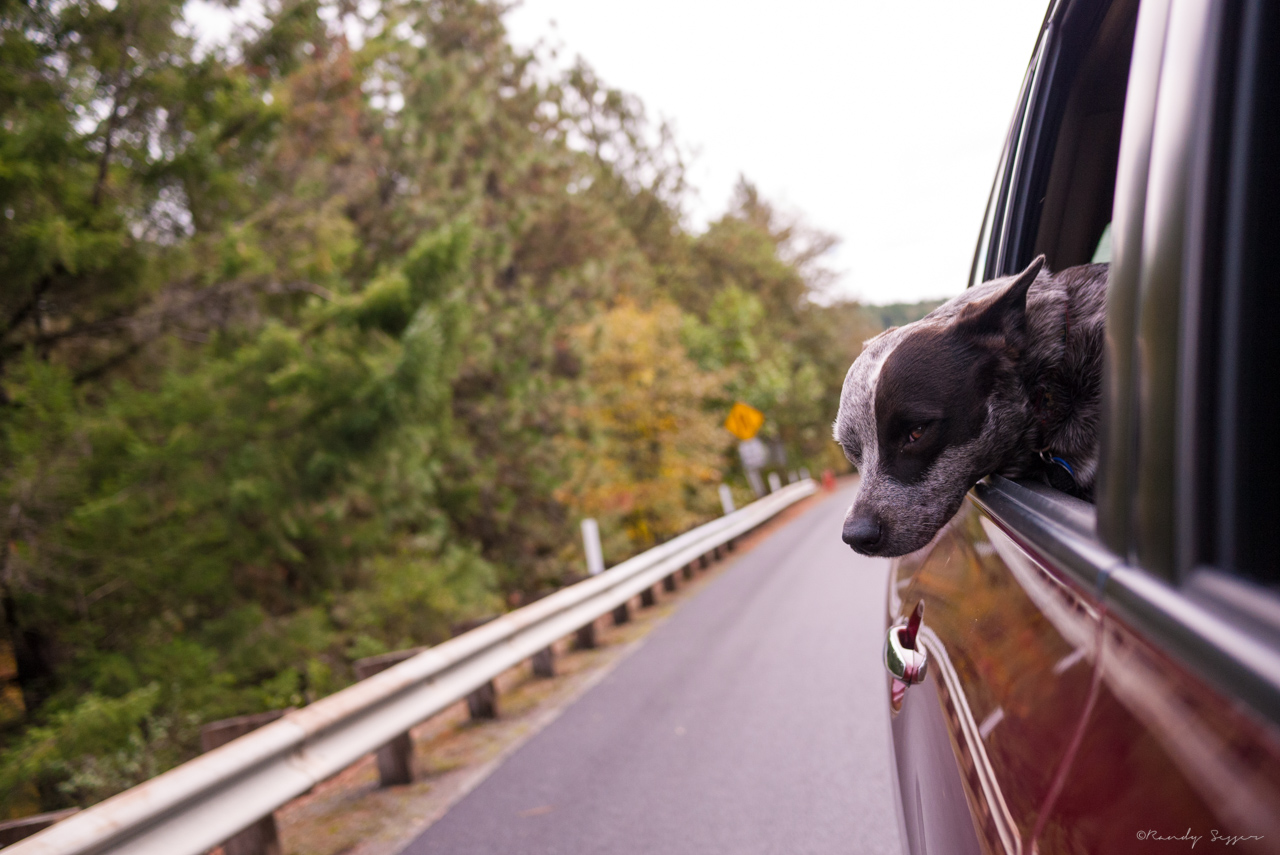 Our first trip from Souther California to Seattle. 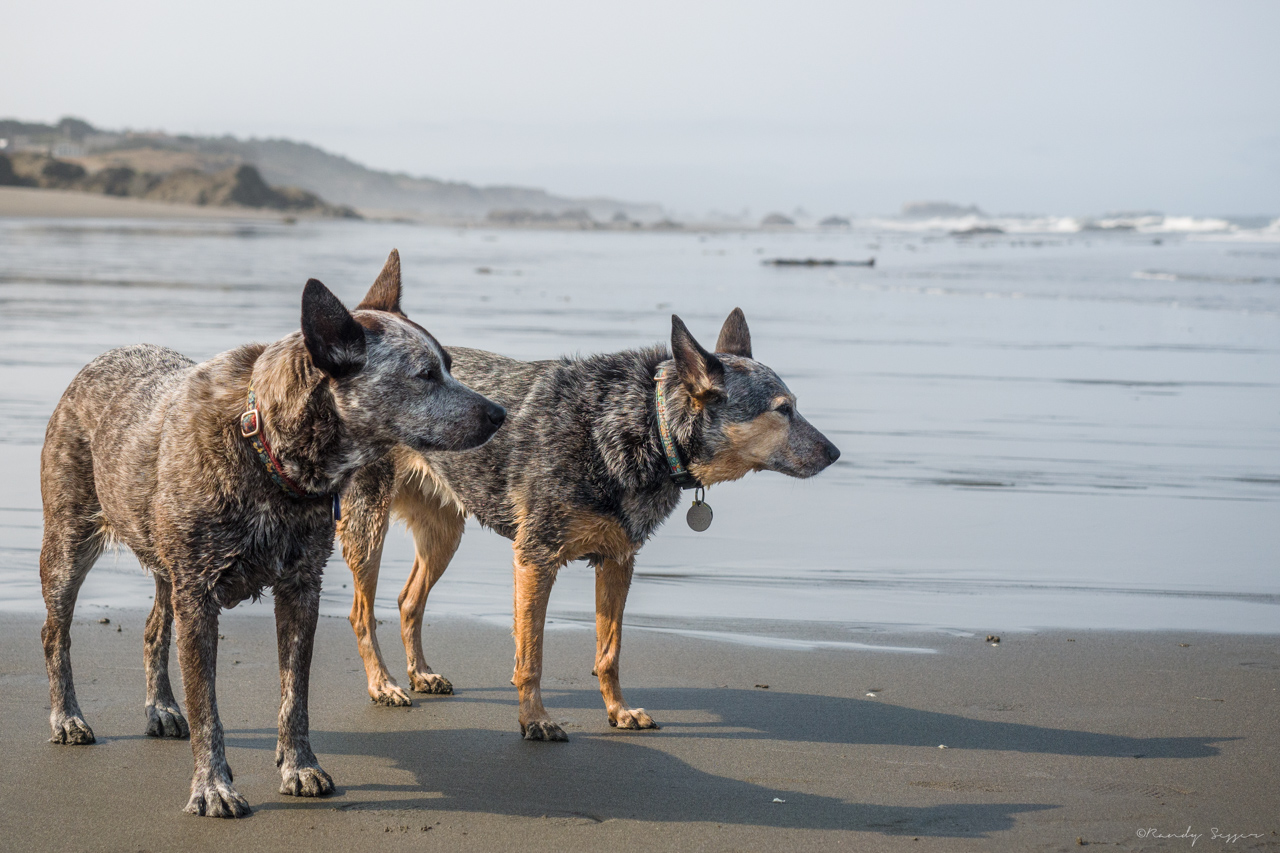 Lilly and Luna on a beach in central Oregon 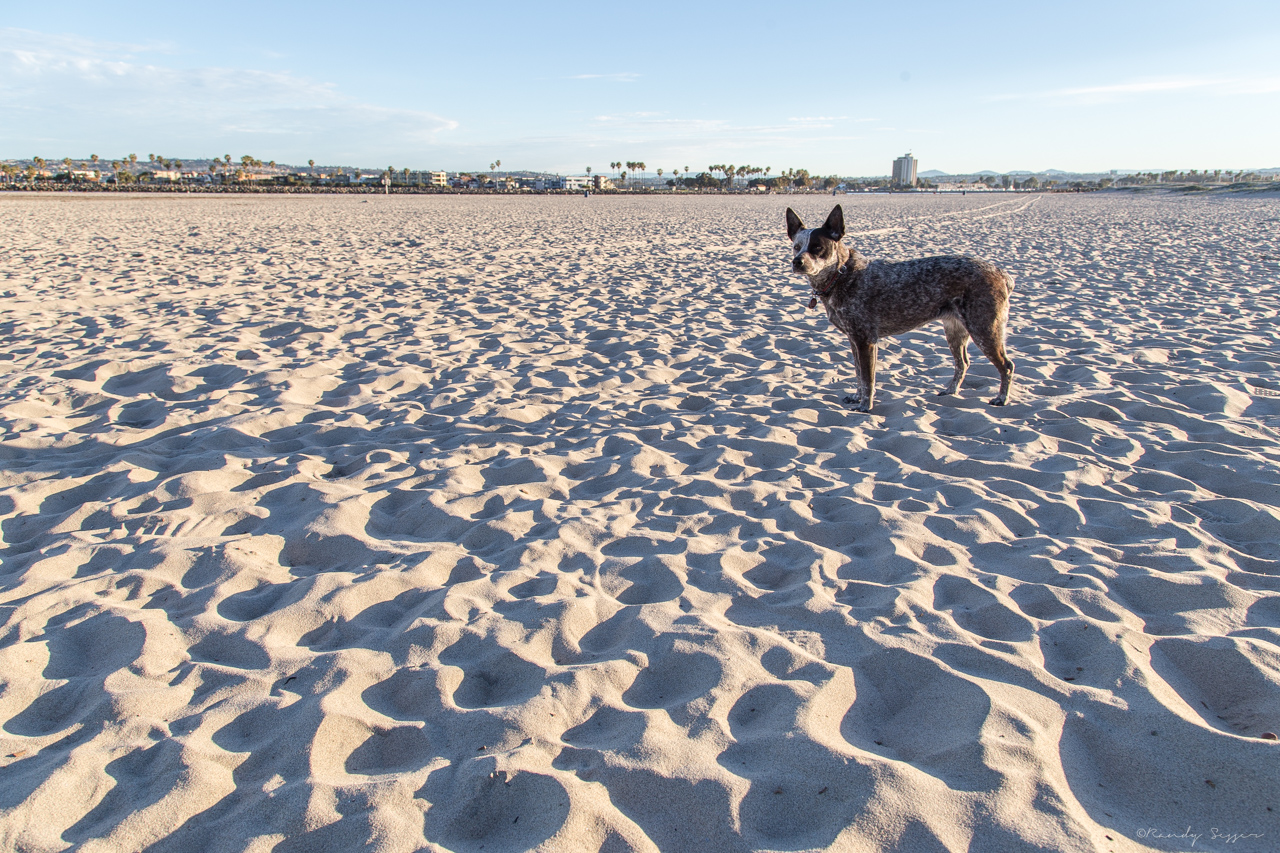 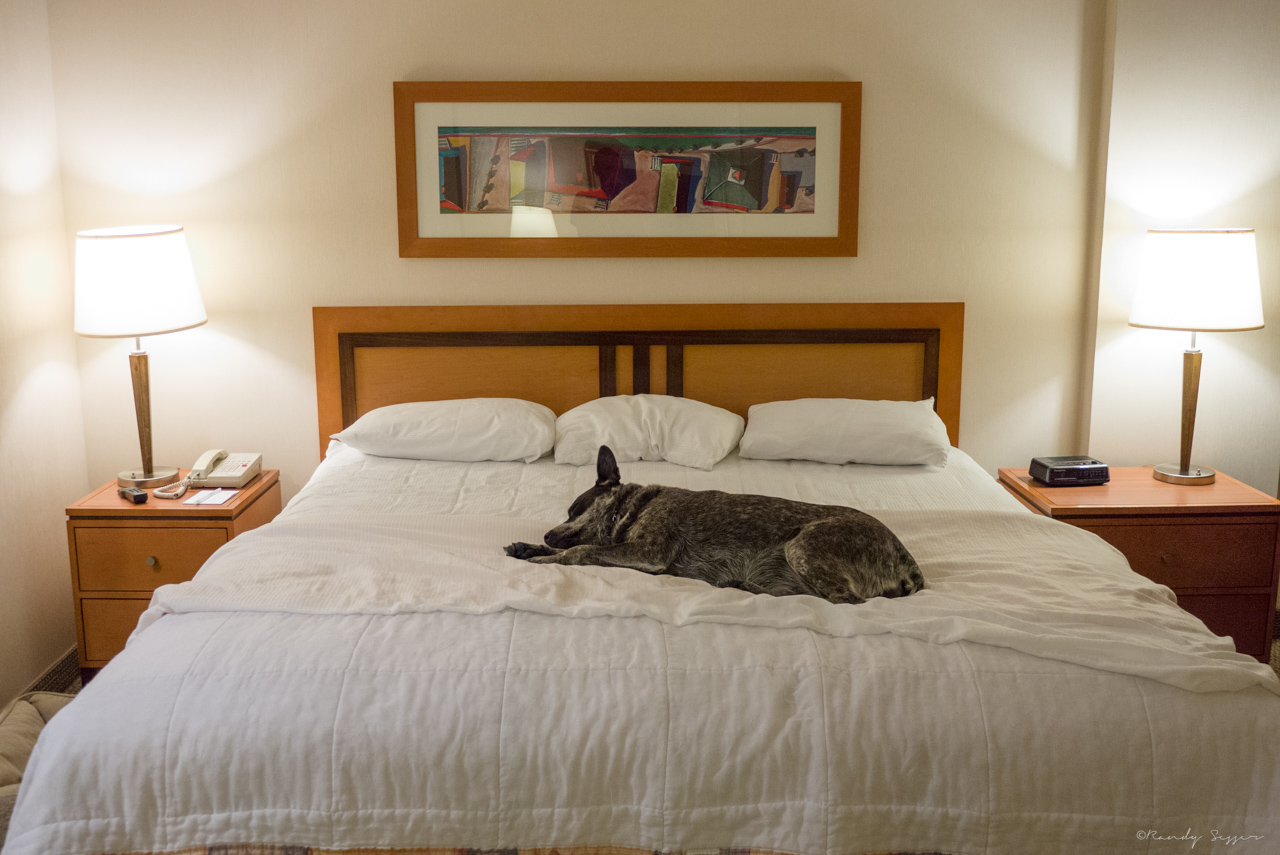 She was a fan of hotel beds. This one in Emeryville, CA 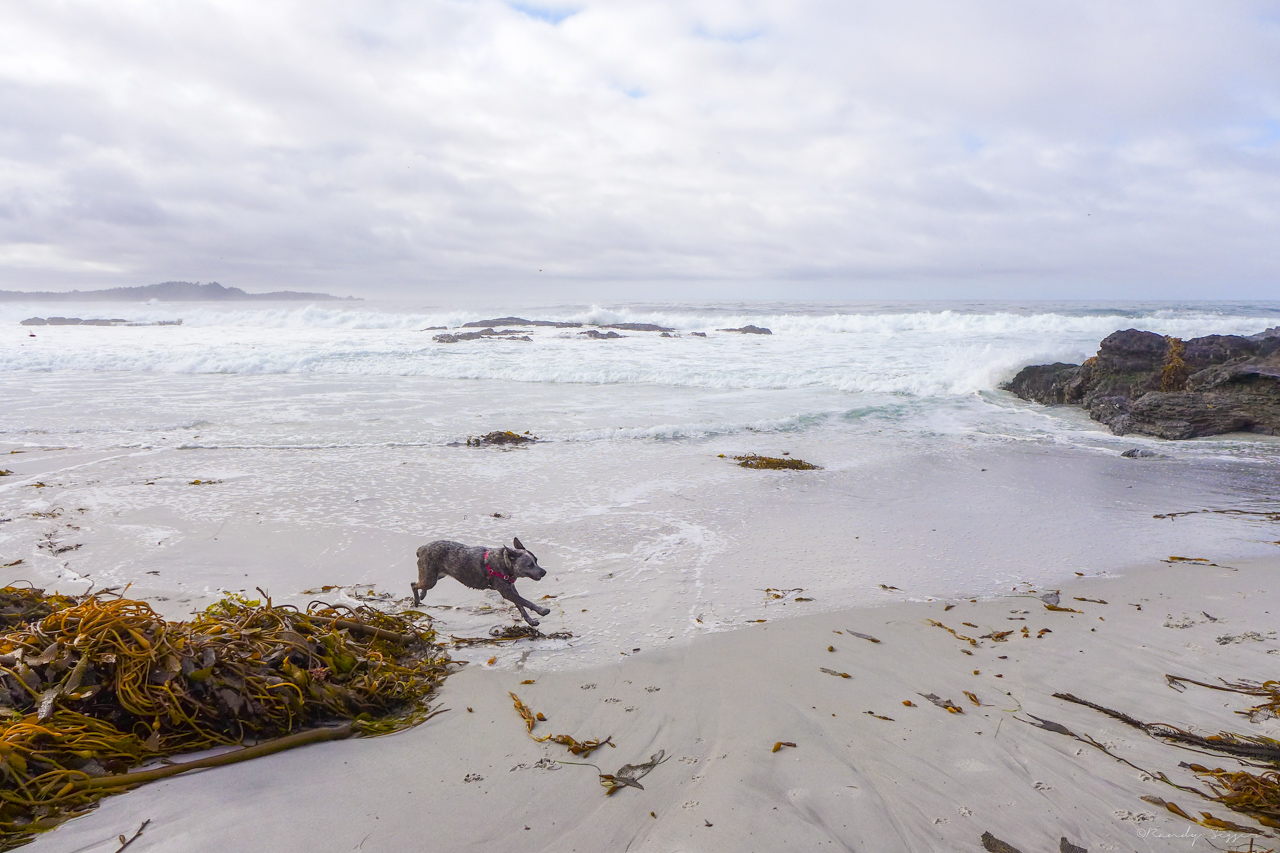 On the beach in Carmel, CA one day after mom's birthday
But then something happened. Something incredibly heartbreaking and sad. You got sick this past June. My heart sank when I saw you come in from the backyard at my parents’ house. You were not yourself and barely walking. We rushed you to an emergency doctor. You had a lesion on your spleen and you were bleeding internally. The ER doc said that it was likely Hemangiosarcoma but could be confirmed with a biopsy. They stabilized you and we drove immediately to the best place we could; UC Davis Veterinary Hospital. They rushed you into surgery and removed your spleen and patched you all up. I felt so terrible for you. I wished I could explain what was going on, but in hindsight, I suppose it's better you didn't have to carry that burden. 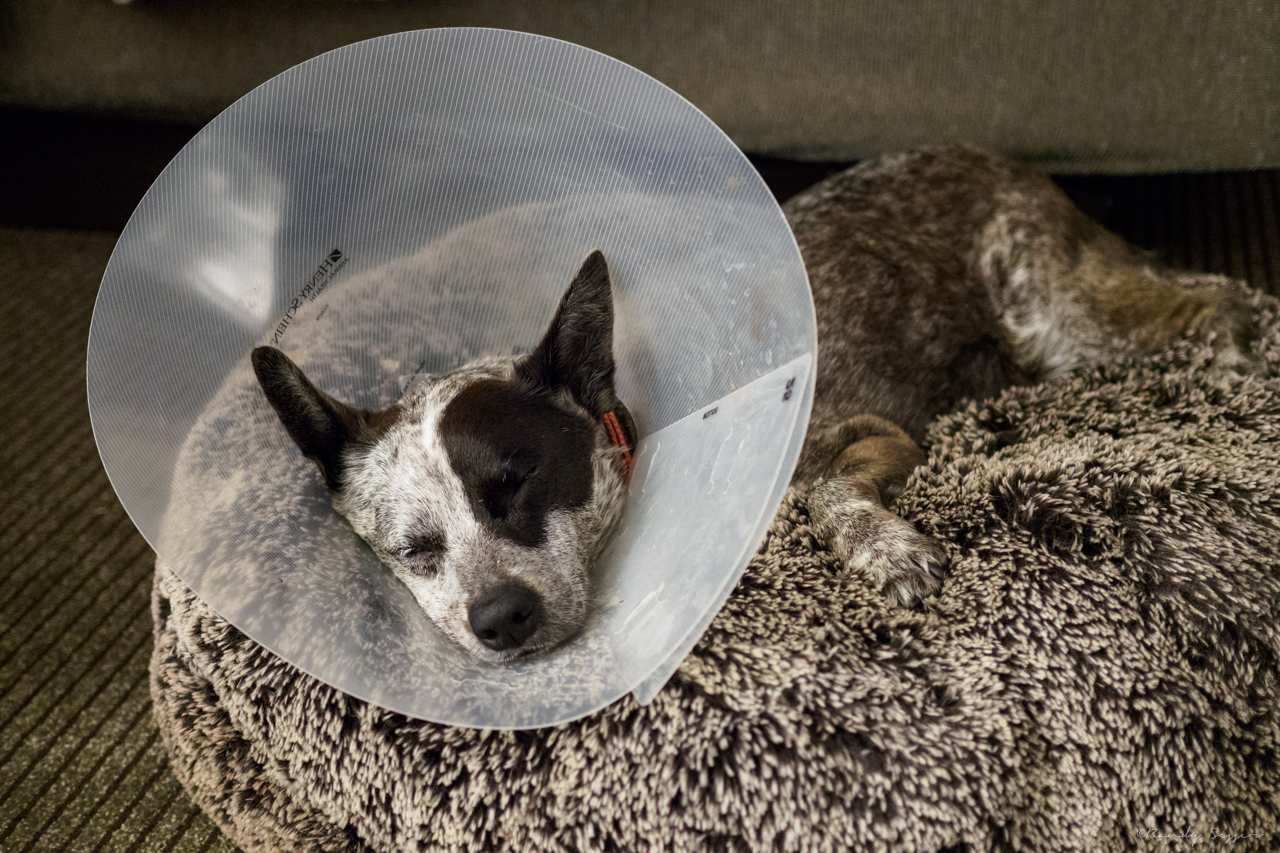 Hayatt Place in Davis, CA. One day after splenectomy.
We were on pins and needles for a week while we waited for the results of the biopsy. If it was cancer, we did not want to subject you to chemotherapy so we explored a holistic approach with Dr. Keith. On the way to your first appointment, we got the results of the biopsy; our biggest fear was confirmed and our hearts sank. The prognosis was a meager 1-3 months, maybe 4-6 with chemo. Dr. Keith gave us hope and good information on how to help you fight this evil fucking disease. He put you on a regimen of Chinese herbs and supplements and explained that it's important to remain positive. So, we did.

But sadly, we could not fix you. We fought like hell to beat it and cherished every moment we had. We even drove you 1000 miles to be reunited with some of your old friends where you grew up. I like to think that you appreciated that (even if that long of a car ride kind of sucks). 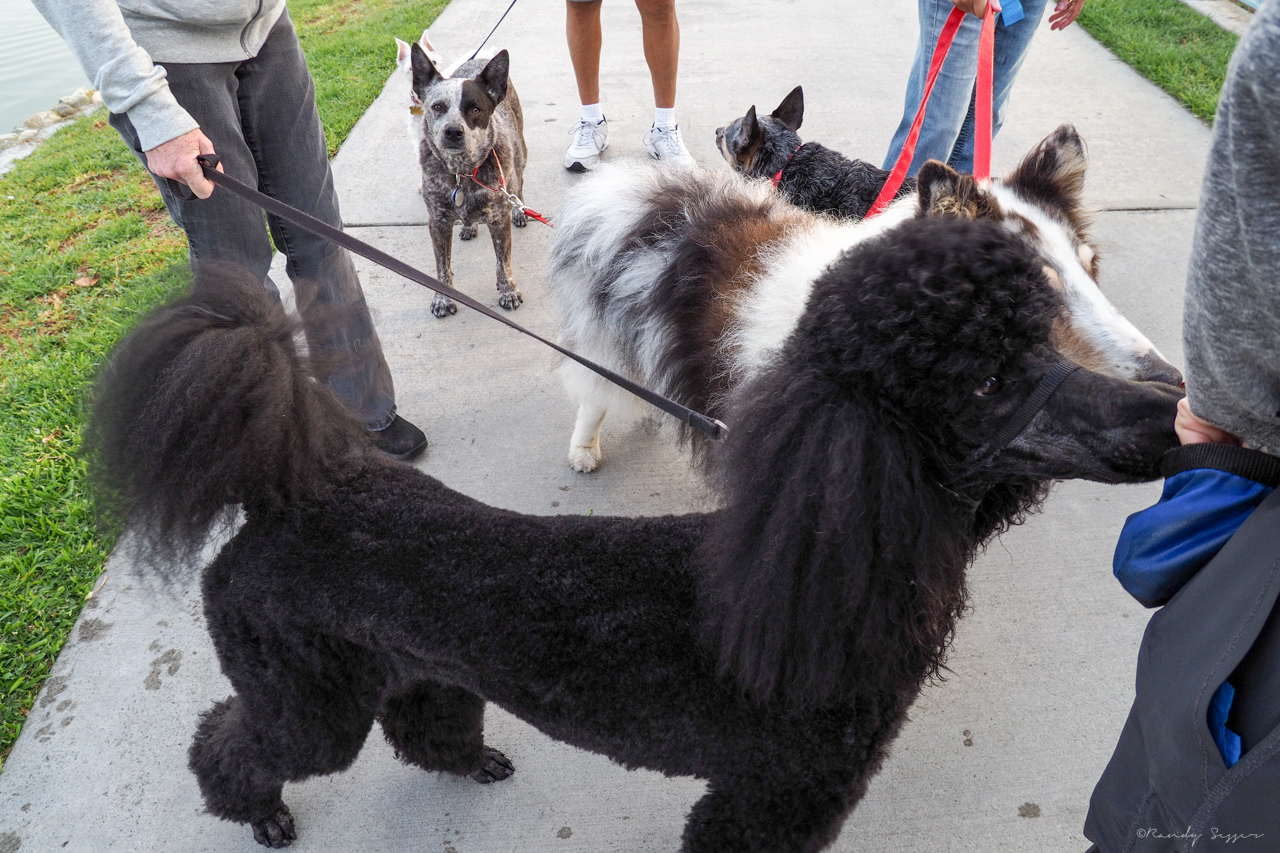 Lilly with her old friends Simone and Buddy
On Thanksgiving morning, we woke up and it was clear you were not feeling right. You were acting like you did that hot day in late June. We began to panic. Dr. Keith had an emergency plan for you in case this happened so we sprung into action! We followed the directions to a T, but it wasn't helping. I wanted so badly for you to just snap out of it! It was starting to sink in. My heart was breaking into a million pieces as you collapsed in my arms, too weak to stand on your own. We did not want to let you go, but we did not want you to suffer. We had to call for help. 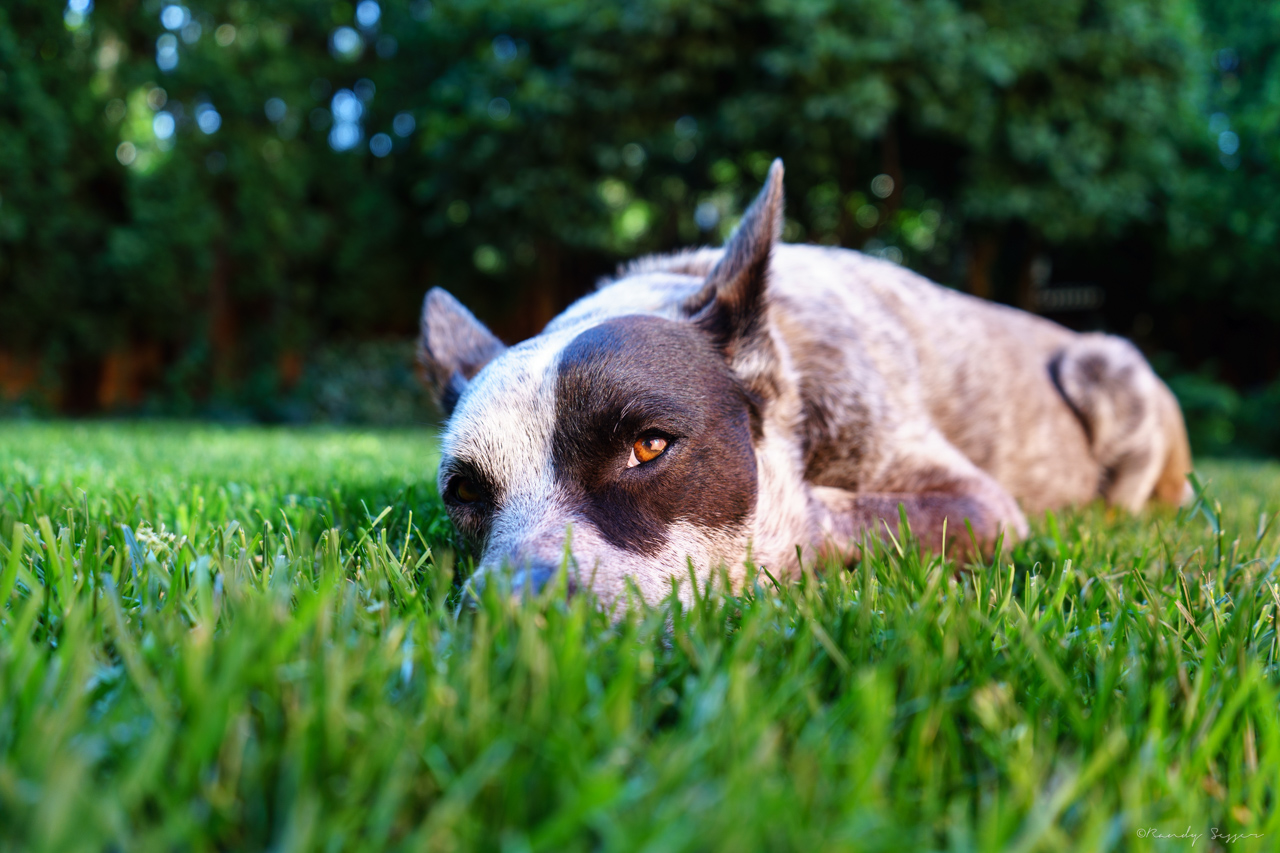 Lilly trying to beat the 100º heat here in Portland
At 9:15am, on November 24th, 2016, as you lay comfortably in your favorite bagel bed, we said goodbye as you left to go be with your friends who departed this Earth before you. 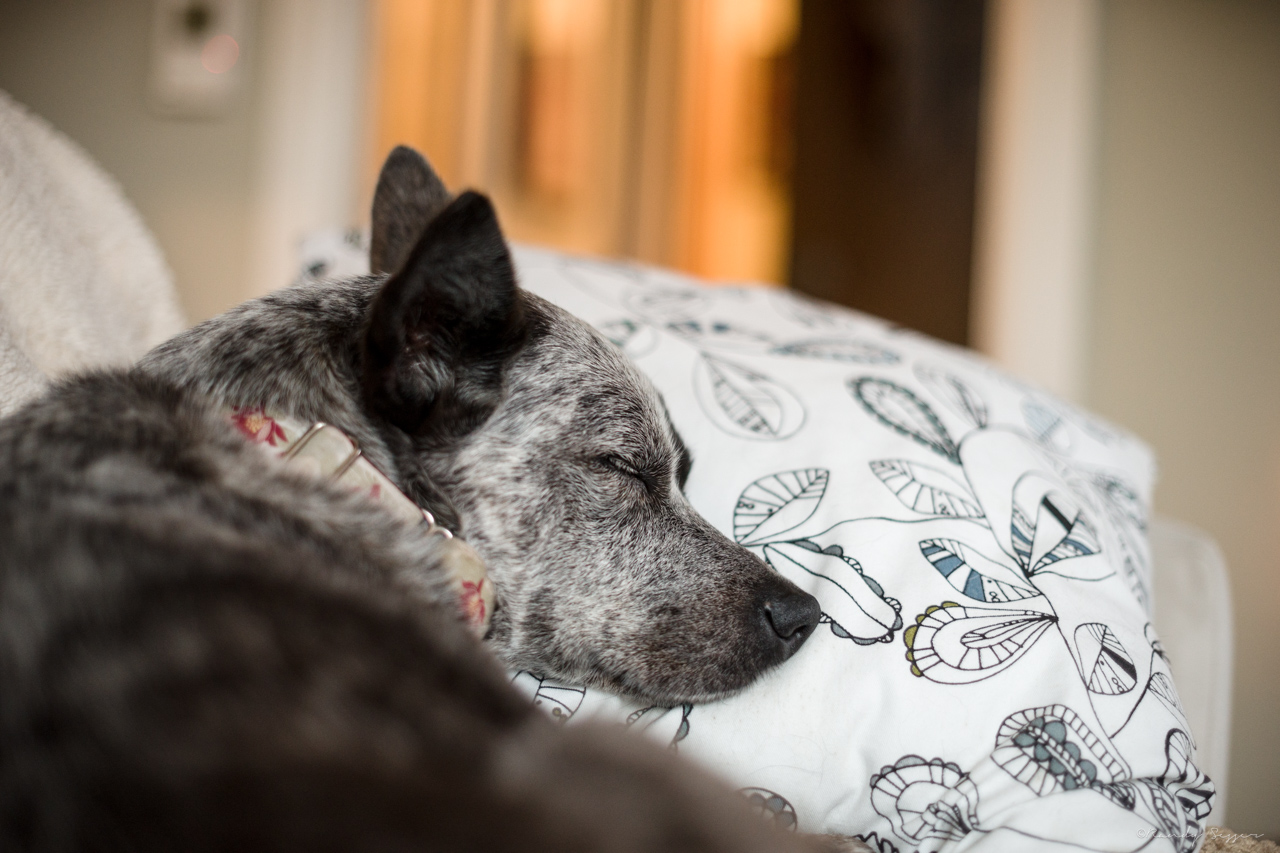 One of her most favorite things; being queen of pillows
I am so sorry we could not fix you. I wish I were telling you "Happy Birthday" to your face. Believe me when I say we would go to the ends of the Earth to have you here by our side right now. I hope you felt how much we loved you and never doubted our friendship. We never doubted yours and will remember it for eternity. The only thing we ask is that you come find us when we're ready. 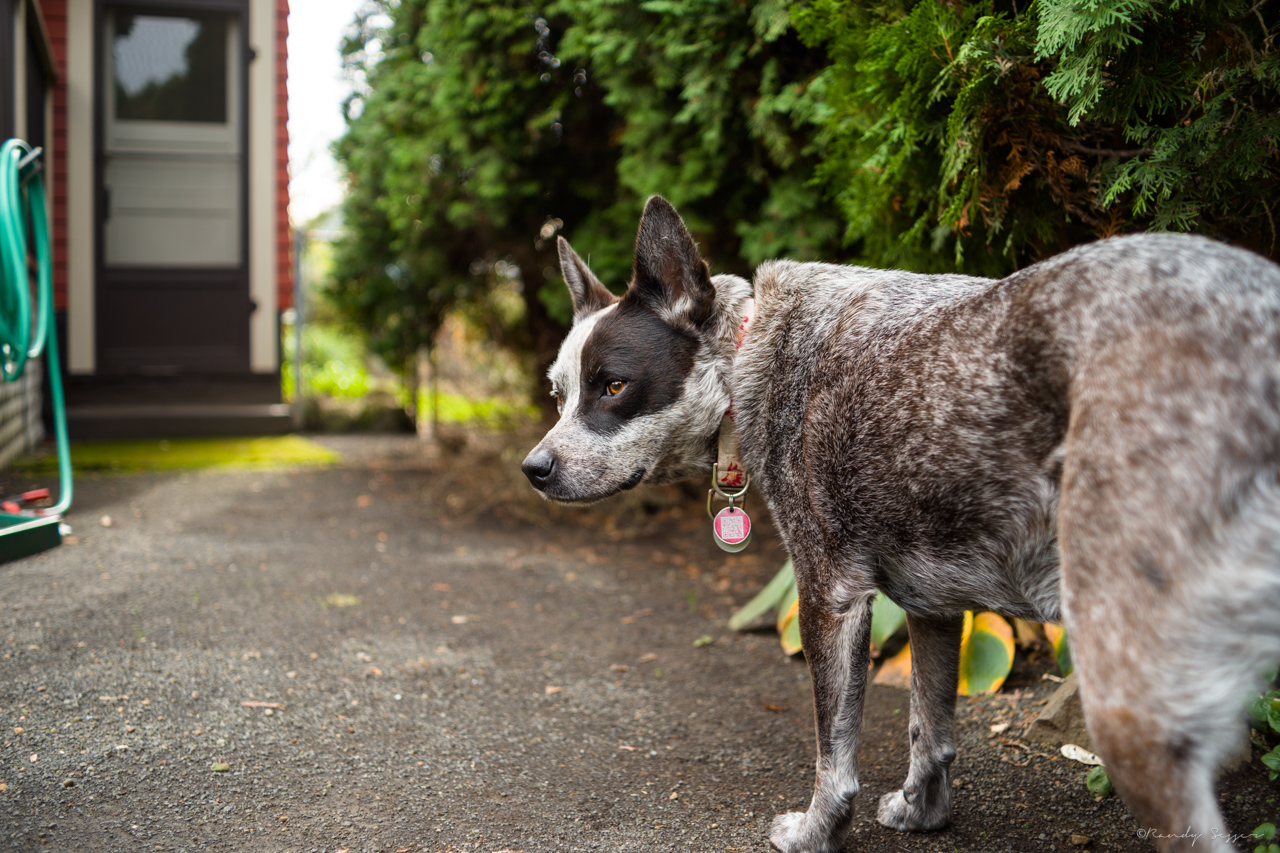 Lilly in her backyard. On the lookout for squirrels

In a previous post, I went on about how I was unsatisfied with my old Olympus OM manual focus…

Why I Left the Full Frame Camp Pt. II

...and eventually came back A while ago, I wrote that I left full-frame for µ4/3. I started to…